Progressing Through Your Strengths

A few weeks ago I decided to head straight for The Fuckin’ Original (7A) in Glendalough. This boulder problem, established by Barry O’Dwyer back in 2003, consists of two hard shoulder moves requiring a lot of core tension to execute the movement. In some ways, the lift off the ground is the crux of the problem, however, for me; the final move was the redpoint crux. Now, this may sound slightly out of place to give such a short boulder problem a redpoint crux, however, what I struggled with was not the lift off the ground so much, but lifting off the ground so that my fingers sat neatly between the crystal edges on the undercling. This was imperative for executing the final lock-off move to the sloper. Often my fingers would shift slightly and slip away from the original starting position and slide over a sharp crystal or two which would be very painful and I would be unable to hold the lock-off position in order to reach the top. The second move of this problem isn’t very hard at all if you do that move independently from the others, however, I found sticking it from the ground, quite challenging. This move was at my full span and I must have fallen from this position over ten times. The good part of the hold was just out of reach for me and so I had to deal with a lower part of the hold which just so happened to be quite an abrasive sloper. Occasionally my drive to complete the problem would force me to slap for the top, regardless of my fingertips screaming otherwise. I could feel my fingers cutting slightly when I pushed through and I started to wonder whether the problem was worth doing or not. Slapping for the top was out of the question at that stage. I was feeling very tired and I knew that I would be unable to hold the position even if I did latch the sloper. I then waited for the sun to disappear behind some clouds and I gave it one last attempt and I was just fortunate enough that my fingers didn’t shift from their starting position and I was able to climb it to the top.

I was in search of some pure power lines to increase my strength and this was at the top of my list, next up was The Cherry (~7A+ - in my opinion). Meanwhile I did not want to compromise my technical ability by focusing solely on pure power lines so I decided to mix it up slightly. A little while after, I took a trip out to Glendasan with my girlfriend to try St. Kevin’s Slab. It’s a 6A+/6B in my opinion which goes straight up the face of a diamond-shaped slab. I had been previously told that the arêtes were not in for this problem and so I was aiming for the very apex of the slab where the arêtes join up. Aesthetically, it’s a beautiful slab problem: perfect setting, perfect movement and perfect holds. Desperate smearing led to a terrifying finish but an ascent that I am proud of, despite hearing afterwards that the arêtes were actually in. After lazing in the sun for a while we headed up to try The Hills Have Eyes (8A) once more. The holds felt slightly better this time and I’m getting excited for the arctic weather to swirl in once more.

I started the third day off by climbing a few brilliant unnamed 6C+’s and 7A’s and as the evening drew closer I decided to head down to focus on finding that alternative sequence to Il Terminato. When I found it, I was psyched out of my mind. I decided, on a whim, to throw my heel up over my head beside my left hand and to reach in under myself with my right hand to take the good undercling. Previously, the idea of taking the undercling with the right hand had baffled me and it felt a lot harder than 7C. I’m pretty sure this isn't how the problem was originally climbed or how most people climb it today but personally I don’t care much for finding an alternative solution. Somehow this works for me and it’s a move I have never experienced before on rock nor on plastic. This brings me back to last winter and how I noticed that with a lot of climbs there was a ‘set’ beta. In the beginning, I felt that you either did it the way the first ascensionist did it or you didn't do it at all. After getting shut down on certain lines, I then became very motivated by the opportunity to come up with my own beta that tapped into my own skills as a climber. Bringing this motivation back the present, in using this beta on Il Terminato I was able to climb the 7B+ version, which starts two moves into the 7C, all the way to the top, but without a pad underneath me I decided to retreat. The top out is a little scary even with a pad underneath me so I've decided to wait until I have a spotter to attempt the full line. 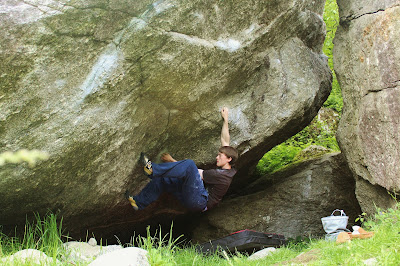 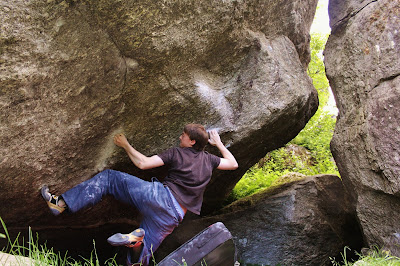 So far, I've been very fortunate with the weather and as 5 pm approaches each day, so too does some of the best conditions I have ever experienced before. I've never really liked climbing solo, I always feel that I have to be more careful with the moves I commit to and I generally feel that I exhaust myself within the first hour or so because I don’t take the necessary breaks I would do with friends. Regardless, the rock is too perfect to go unclimbed. Yesterday, feeling an urge to really shut myself down on my dream line, I went in search of Bad Ass (8A). This line looks exactly like every problem I enjoy creating on the systems board in the gym. It’s a perfect 45 degree face that follows a ladder of crimps set very far apart from one another. Despite walking for 7 hours, covering 18 km, I was unable to find it – maybe someday. Today, I will look for Due Cervelli, Uno Soluzione (7C+) which is very nearby and very approachable. The quality of climbing here is beyond all expectation and even though there are so many boulders I want to do, there’s one route that has really caught my eye. I don’t really know anything about it but it follows a series of deep, in-cut pockets up an overhanging face. At first glance, I was really surprised to see pockets on a granite face but on closer inspection, the rock is so polished that it may as well be a well-trafficked limestone route with no friction. Regardless, I’m still very excited to try it at some point during my stay here… 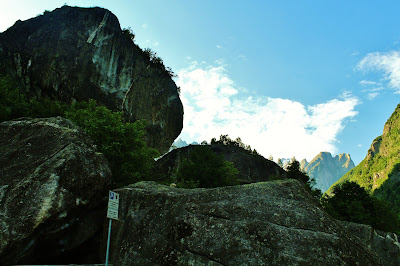 And so it’s onto the next challenge…